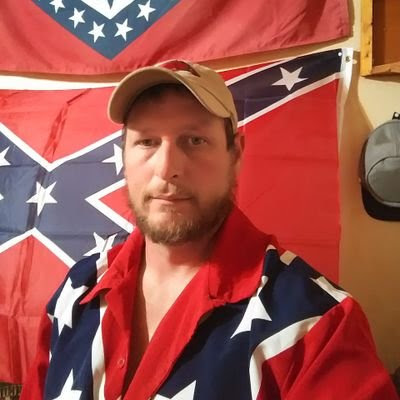 In 2016, Billy Sessions, whose real name is Billy Helton, founded a hate group known as The Hiwaymen in order to participate in the deadly Unite the Right event in Charlottesville, Virginia.

The Arkansas-based Confederate group now seems to be struggling, as members are defecting to another group called the Shieldwall Network. That's a group of Nazis.

Other members have taken to spreading info to the public about Billy's diminishing behavior, which has seen him go off in unfettered rages, often fueled with alcohol, where he threatens violence on people he dislikes.

On Monday night - May 27th - Sessions did his nightly live stream on Facebook, while allegedly drunk. The video is a series of rages ranging from Confederate monuments to parenting.


Sessions reveals his early run ins with law enforcement and delinquency, then goes into a tirade about how parents need to beat their children, so they won't grow up to be disrespectful. This after telling his audience his father beat him and how he abused his own son.

There's a lot of disconnect there. He was a delinquent, who grew up to become the violent, unemployed leader of a hate group. Sessions' anger and call for abusing children, as the right way to go, fails to take into account the emotionally unstable adult he became after growing up in such an abusive home.

Billy Sessions also graphically talks about the violence he would wage on those disrespecting Confederate monuments.

His behavior has grown more erratic, angry, and violent since the Hiwaymen showed up and attacked a trans rally in March.

Sessions' live streams are suffering a plummet, as viewers grow tired of his mental decline and abandon the man with narcissistic personality traits.

He's also been struggling for money, as the donations he's been receiving have dried up, forcing the unemployed Hiwaymen to auction off his personal belongings online.


The Hiwaymen's childhood trauma being the victim of an abusive father seems to have caused him to continue the cycle of abuse with his own son.

That cycle of child abuse can be broken. 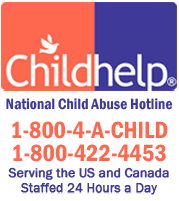 Read more »
Posted by Hate Trackers at 11:02 PM
Email ThisBlogThis!Share to TwitterShare to FacebookShare to Pinterest 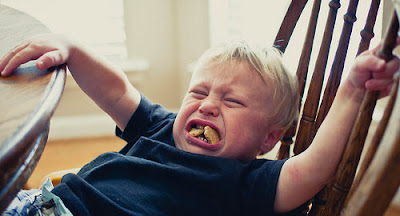 Monday morning saw Billy Sessions of the hate group known as the Hiwaymen go into major temper tantrum mode where he screamed at and threatened his followers and other members of the Patriot Movement, who have been taking attention away from him.

It appears, Sessions doesn't like being embarrassed by others as he does just fine doing that by himself.


The unemployed Sessions, whose real name is Billy Helton, has had a string of embarrassing actions of late, which may be contributing to his mental deterioration.

Recently, they began running a suspect anti-bullying campaign after assaulting trans people and harassing a mosque.

Read more »
Posted by Hate Trackers at 11:39 AM
Email ThisBlogThis!Share to TwitterShare to FacebookShare to Pinterest

Now a full-blown hate group and with a founder obsessing over pedophilia, the Hiwaymen are scheming to get around school children in a suspect anti-bullying campaign


Recent activities by the Hiwaymen, an Arkansas-based group that began public actions at the deadly 2017 Unite the Right rally in Charlottesville, NC, has seen an escalation in their thirst for violence and the advent of a very suspicious anti-bullying campaign.

We've been monitoring Hiwaymen co-founder James Del Brock's sudden obsession with pedophilia that began with him conflating LGBTQs with that behavior and has since transcended to where he has concocted an anti-bullying scheme and started hanging out near Arkansas school yards.

While trying to lure the school children over to him, Del Brock and his people have been handing out balloons to the children and trying to talk to them without school personnel or their parents around.


An anti-bullying campaign is certainly greatly suspect considering Del Brock and his fellow Hiwaymen have attacked a trans rally and harassed mosques this year.

After their attempt on February 25th to enter an LGBTQ Human Rights Campaign meeting in Little Rock was stopped by security, the group seemed to become more focused on anti-gay activities.

The Hiwaymen had falsely claimed they'd been invited to the meeting and were rather peeved their deception didn't get past security.

Their resentment towards LGBTQs escalated on March 31, 2019, when the Hiwaymen showed up at the Arkansas State Capitol where they assaulted numerous trans people and their allies, who were there for a Transgender Day of Visibility event.


Last week, they harassed LGBTQs along the gay district of Fayetteville, Arkansas and have promised to return to cause more trouble. They are planning on disrupting the NWA Pride event in Fayetteville next month.

Del Brock's co-founder Billy Sessions, whose real name is Billy Helton, was witnessed in a video following the harassment waving a knife he claimed to have hidden on him, while bothering LGBTQs.

On May 5th, the Hiwaymen harassed an Oklahoma City mosque where they were openly seen wearing knives on their belts. A half-wit named Jonathan Addison was dressed as bacon, while the others ate bacon and hurled insults at people leaving the OKC mosque.

The Hiwaymen had originally planned to harass a gathering at the Oklahoma State Capitol in Oklahoma City where a rally had gathered to bring attention to Missing and Murdered Native Women.

However, the Hiwaymen remained off the capitol grounds after seeing it was being heavily guarded by law enforcement and indigenous security.

They then went on a hunt for the Planned Parenthood building in OKC, but were unable to find it, so ended up on an expressway where they screamed at motorists.

After that, it was off to assail the mosque.

FYI, pork is not kryptonite to Muslims. They simply choose, like many Jews, not to eat it. They don't care if someone else consumes bacon or not. That's a point the poorly-educated Hiwaymen fail to grasp.

With their homophobia and Islamophobia on full display, clearly, bullying is something they do not truly oppose.

Now it appears Billy Sessions has even waded into the murky waters of 4Chan with his pal Del Brock. Both are now associating with QAnon types, who, like the Hiwaymen are obsessed with pedophilia.

Del Brock now seems poised to fool more of the public into thinking he and the Hiwaymen are interested in ending bullying. 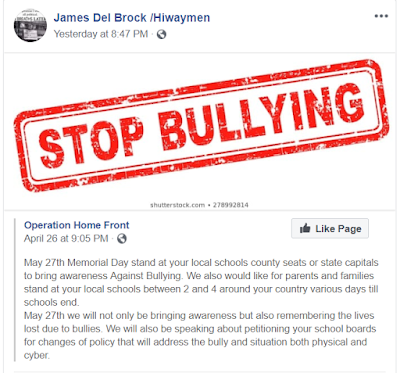 Thankfully, being a holiday, there shouldn't be any unsupervised children around for Del Brock to lure over with balloons.

Read more »
Posted by Hate Trackers at 11:00 PM
Email ThisBlogThis!Share to TwitterShare to FacebookShare to Pinterest

City officials in Edmond Oklahoma - an infamous sundown town - refuse to meet with family of unarmed 17-year-old black youth gunned down by police.

You can read about that here.

The family has been trying to meet with city officials since the shooting.

Today, Isaiah's family received a sharp response from the City of Edmond.

The insensitive letter accuses the family of trying to put the city in a bad light. 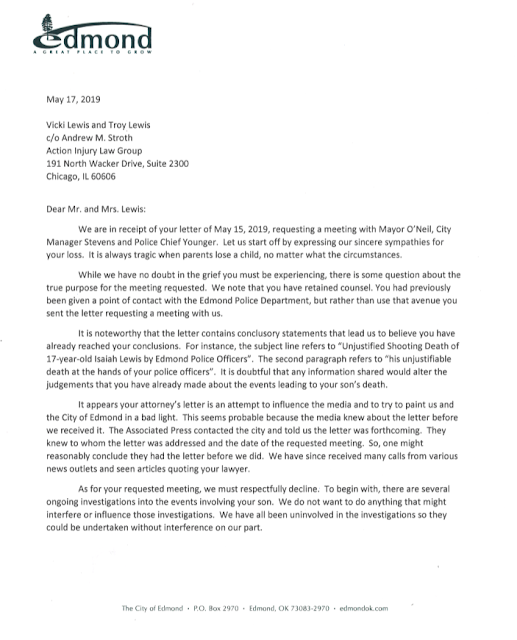 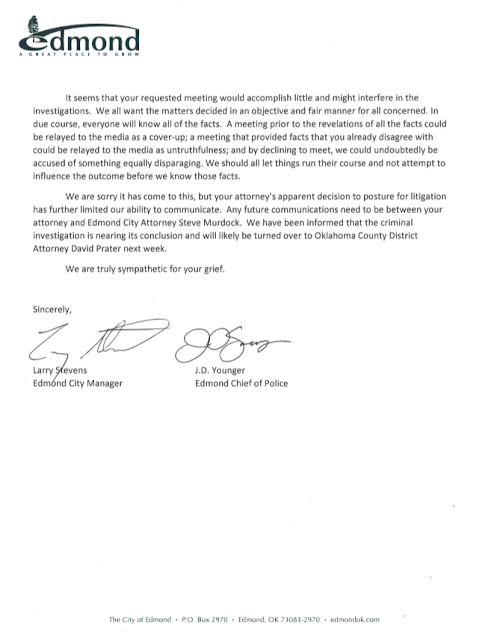 Younger's force has in the past misused their authority to harass a Hate Trackers journalist after we released photographs of an Edmond state senate candidate and local pastor named Paul Blair allegedly wearing a Ku Klux Klan robe outside his church. 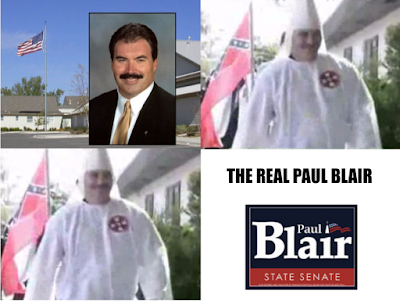 Blair runs a number of anti-gay and Islamphobic hate groups in Oklahoma.

Edmond Detective Chris Cook threatened the reporter with jail if he did not stop reporting on the Blairs.

What launched the Edmond Police Department's extortion attempt was a Facebook response made to Paul Blair's wife Cynthia.

That post said, "He needs to decide which god he serves. I see your sons and your husband have all been too cowardly to ever serve their country. No, they’re busy sitting their . . . on the sidelines and using their mouths. By the way, there’s a mass printing of those KKK pics of Paul being prepared for a citywide mailing in Edmond.”

Our reporters, however, don't fall to extortion attempts - even ones coming from the Edmond Police Department.

Despite his private use of the Edmond Police Department to push people around, Paul Blair lost his 2016 state senate race. The pastor threw a mega-tantrum over it too, as lampooned by a Oklahoma City satire site here.

The City of Edmond was - and some will claim still is - one of Oklahoma's last remaining sundown towns. Such towns would not allow blacks inside city limits after sundown. In fact, it's only been in modern times that realtors there began selling homes to People of Color.

Edmond is also home to a satellite school of the Christian Heritage Academy, which was originally founded so white people could get their children away from blacks being bused into the Oklahoma City school system.

That satellite school is helmed by Paul Blair.


Klan infiltration into the Oklahoma justice system isn't exactly a rare thing. Hate Trackers recently revealed that the Tulsa County Court Clerk has an assistant named Bonnie Kukla, who is with the Knight's Party of the KKK.

Tulsa, also, has a history of shooting unarmed black people, such as the killing of Terence Crutcher in 2016 by their police officer Betty Shelby.

Shelby lost her job at the Tulsa PD, but was quickly snatched up by the notorious Rogers County OK Sheriff's Department even though she'd been declared unfit for duty.

Due to Edmond, Oklahoma's unique nature, it and its residents have been the subjects of frequent articles by us.

Most recently, we reported on a nationwide gathering of anti-gay figures Paul Blair was hosting at his Fairview Baptist Church, about an Edmond veterinarian's gay slurs, and a home builder residing there who is fond of lodging racist stereotypes against Native Americans.


Late last year, black students transferred from Edmond North High School, due to what they described as a "culture of racism."

One student told a KFOR reporter, “There's a bunch of black people here that feel like they don't belong, and I'm one of those people.”

Racism isn't Edmond's only bread and butter, when it comes to hate. It's a bad place for LGBTQs as well.

During the 1970's the pop singer launched a national campaign targeting gays and lesbians where she tried everything from banning adoptions to getting LGBT school teachers fired. After running years of swindles in Pigeon Fork and Branson she fled to Edmond to avoid bill and tax collectors along with unpaid employees, who were all hot on her tail.

Clearly, Edmond, Oklahoma is a place best avoided by people of good will.

One certainly doesn't really know who is running things at the Edmond Police Department, be it Chief J.D. Younger or someone that could possibly be with the Ku Klux Klan...or someone wanting to come after you with a baseball bat.


Help Hate Trackers continue exposing the alt-right and other serious groups and individuals, by making a donation to our website. We're here to keep you and your family safe and informed. Donate Here


Posted by Hate Trackers at 6:06 PM
Email ThisBlogThis!Share to TwitterShare to FacebookShare to Pinterest 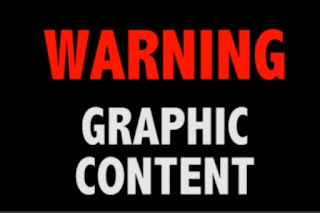 Hate Trackers is monitoring a neo-Nazi named Donovan Segan in Temecula, California, who appears to be going off the deep end. His actions are of a severely mentally ill person, who we believe poses a threat to public safety.


We screen grabbed some of his social media posts that are highly disturbing. Segan wants to organize a band, which he is calling Cult of Excess. His intentions are to have it become the most despised band ever with a focus on "Rape, child molestation, scat, blood, racism, etc." 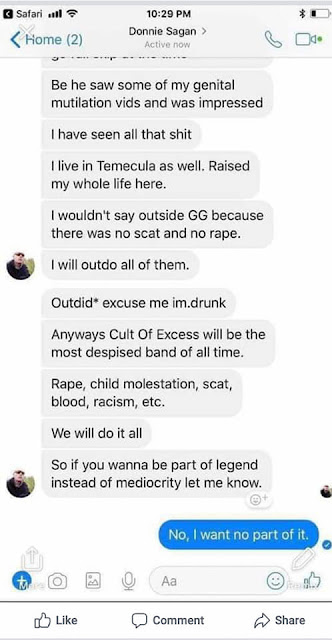 In another shot, Segan reveals he's been cutting himself, eating his own feces, and mutilating his genitals with fish hooks and thumb tacks. 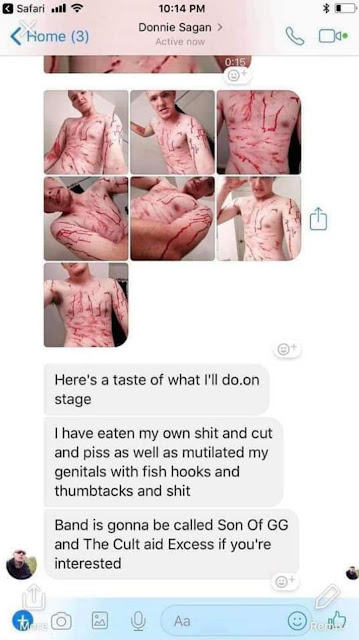 The subject has a Facebook under Don Goethe, but it is now locked from public view. 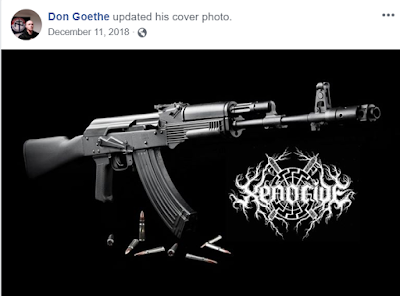