Hiwaymen make threats in Oklahoma, head to New Mexico to team up with armed Proud Boys 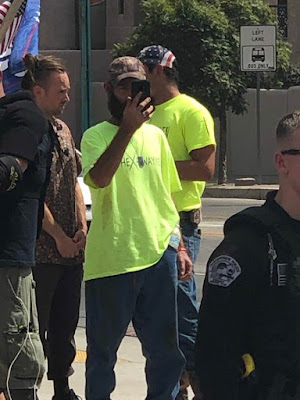 As the Arkansas-based hate group known as the Hiwaymen, try to expand out and reach more targets, it appears they're escalating an already established pattern of disruption and violence.

On Friday, a man named Harold Royse of Muskogee, Oklahoma, popped up on our Facebook messenger claiming to be with the Hiwaymen after making violent criminal threats towards Hate Trackers. 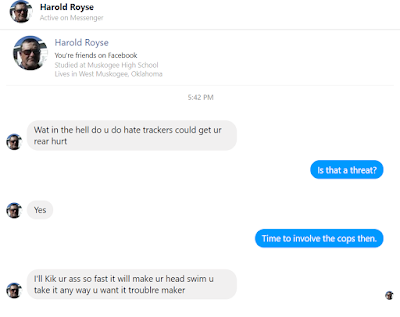 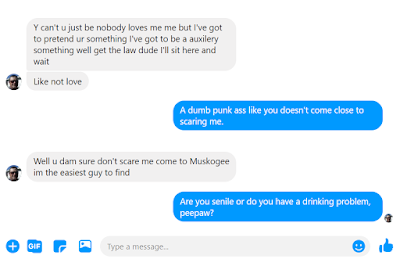 Criminal charges are to be filed against that Hiwaymen.

Then on Saturday, Oklahoma members of the Hiwaymen, including convicted felons Travis Rail and Acea Duran, Ericka Duran, and Daniel Davis, showed up in Albuquerque, New Mexico, ahead of a Trump rally scheduled to take place on Monday in nearby Rio Rancho.

They soon found themselves up in someone else's business trying to start a brawl, which duplicates their previous behaviors across the country.

Rail has an extremely long criminal record ranging from 1998 - 2018 that shows an unstable, violent man with a slew of misdemeanor and felony charges, which include pointing firearms, cruelty to animals, escape from lawful custody, driving under the influence, possession of drugs, threatening violence, resisting arrest, and public drunk.

His most recent conviction stems from an April 2018 case in Carter County, Oklahoma. It involved Possession of Controlled and Dangerous Substance - Clonazepam.

In 2012, the Hiwaymen was convicted of larceny and concealing stolen property. Pleading no contest, Duran was was given a five-year deferred sentence.

Rail, Duran, and the others ended up teaming with members of another hate group - the infamous Proud Boys - to attempt a disruption of a peaceful antifascist demonstration aimed at denouncing the racism and violence that occurs during Trump rallies.

ProgressNow New Mexico was live streaming on Facebook as the hate groups tried to interfere with their action.

Note: The Hiwaymen are in bright neon yellow t-shirts, while the Proud Boys are in their typical uniform of a black polo with gold piping.

Police managed to keep all parties separated, but there were some sporadic encounters between the groups after the rally ended.

One video shows a member of the Proud Boys brandishing a gun. Later in that same video, another Proud Boys goon expresses his concern about the optics of such an act.


Based out of Arkansas, the Hiwaymen are run by two notorious grifters named Billy Sessions, aka Billy Helton, and James Del Brock. They began public actions at the 2017 Unite the Right in Charlottesville, which saw a neo-Nazi named James Fields Jr. plow his car into anti-fascists killing a young woman named Heather Heyer.

Since that time, they've participated in violent actions around the country, including attacking an anti-fascism rally in Austin, TX and Portland, OR where they joined up with Joey Gibson's Patriot Prayer.

Back in March, the neon yellow-shirted goons attacked trans people at a peaceful Trans Day of Visibility gathering in Little Rock. 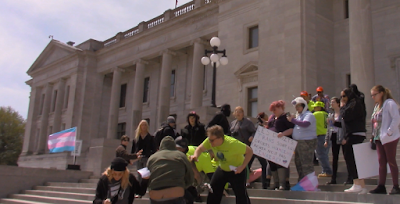 While in Albuquerque, Hiwaymen Daniel Davis was live streaming on Facebook, as the group hurled anti-gay slurs across the street. Of course, they were well protected by police during their sideshow.

You can view that video here.

Once things wrapped up and their police protection was gone, the Hiwaymen rushed to find their ride share in order to exit the area. 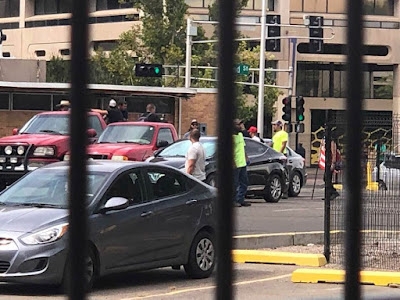