Travis Wayne Rail, 39, recently co-hosted a Hiwaymen gathering in his hometown of Ardmore, Oklahoma, where the documented hate group rallied for pro-gun rights.

Rail is a convicted felon with a lengthy criminal record, who is not supposed to be in possession of guns or even be around them.

Based out of Arkansas, the Hiwaymen are run by two notorious grifters named Billy Sessions, aka Billy Helton, and James Del Brock. They began public actions at the 2017 Unite the Right in Charlottesville, which saw a neo-Nazi named James Fields Jr. plow his car into anti-fascists killing a young woman named Heather Heyer.

Since that time, they've participated in violent actions around the country, including attacking an anti-fascism rally in Austin, TX and Portland, OR where they joined up with Joey Gibson's Patriot Prayer.

Back in March, the neon yellow-shirted goons attacked trans people at a peaceful Trans Day of Visibility gathering in Little Rock.


On August 17, 2019, felonious Rail along with a number of Hiwaymen, including his co-host a convicted thief named Acea Duran, who live streamed the event, were out to protest a statewide initiative to repeal an Oklahoma law that would allow anyone to open carry a gun without having a permit or background check. They folded that in with a pro-Trump endorsement.


Permitless carry becomes law in Oklahoma on November 1, 2019. Fearing the state was going to go Wild Wild West, a referendum petition seeking a public vote to prevent it from taking effect started circulating the state this month.

The permitless carry bill does prohibit convicted felons from open carrying firearms, but the police and public really can't tell from sight, if they have a criminal record or not.

The petition came on the heels of deadly mass shootings in El Paso, TX and Dayton, OH.

That's 20 miles from Ada, OK where he and the Hiwaymen did an anti-LGBTQ+ action back in July.

It cost pottymouth Duran his job, as screaming obscenities and homophobic slurs at his employer's potential customers didn't set well.

That general area of Oklahoma has a lot of Ku Klux Klan running around, due to its roots in the Confederacy.

Before the Land Run of 1889 allowed for white settlement in Oklahoma, a number of Confederates moved in after the Civil War and stole land from the Choctaw and Chickasaw by gunpoint. Their descendants make up a large part of the white population in Southeastern Oklahoma.

The area is known as Little Dixie and racism is pretty rampant. The Hiwaymen consider themselves a pro-Confederate group, so their lawless members fit in quite well.

Being able to open carry a gun and not having to have a permit for it is a felon's dream.

Rail is such a felon. Duran is too, as in 2012 the Hiwaymen was convicted of larceny and concealing stolen property. Pleading no contest, Duran was was given a five-year deferred sentence.

Duran's crimes, however, pales in comparison with his co-hort Rail. 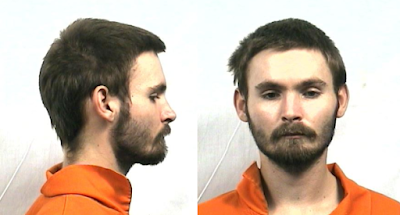 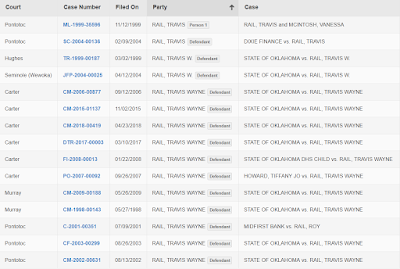 Criminal records ranging from 1998 to 2018 show an unstable, violent man with a slew of misdemeanor and felony charges, which include pointing firearms, cruelty to animals, escape from lawful custody, driving under the influence, possession of drugs, threatening violence, resisting arrest, and public drunk.

His most recent conviction stems from an April 2018 case in Carter County - that's where Ardmore is located. It involved Possession of Controlled and Dangerous Substance - Clonazepam.

In 2015, he was arrested in that same county for Threatening to Perform an Act of Violence. When police officers tried to take him into custody, Rail resisted.

The Hiwaymen is a violent druggie, who wants to be able to walk around with a gun. Let that set in.

Rail has served time for many of those criminal charges. A search of the Oklahoma Inmate database pulled up numerous mugshots and sentences. 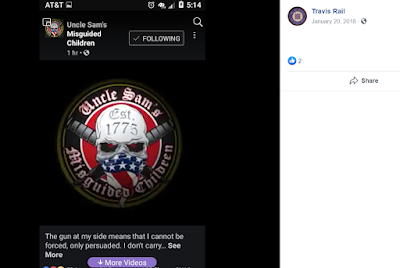 Three of the Oklahoma natives in Ardmore for the pro-gun rally - Rail, Duran, and Yukon, OK resident Daniel Davis - first showed up doing actions with the Hiwaymen on May 5, 2019. Prior to that, there was little to no involvement by Oklahomans in the Southern hate group.

The Hiwaymen began their day of hate at the Oklahoma State Capitol where they popped up to disrupt a Missing and Murdered Indigenous Women (MMIW) event. They were were quickly run off by American Indian Movement (AIM) security.

The cowardly racists, who were armed with knives and clubs, did not want a piece of AIM, so never got near the actual MMIW assembly.

They then drove around OKC looking for the Planned Parenthood building, but couldn't find it even though it sets in plain sight.

Eventually, they found a mosque to terrorize in western Oklahoma City.

Showing up in Ardmore a week ago was out-of-stater Jonathan "Pig" Addison, who dressed up as bacon at their May anti-Muslim rally in Oklahoma City.

As seen in the photo below, Duran's role was to eat bacon in front of the mosque, while Rail took a selfie to go with his collection of mugshots. 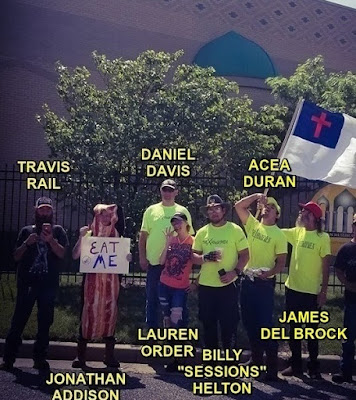