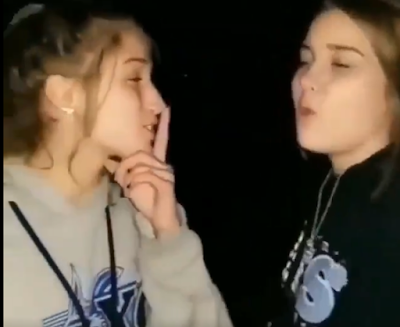 UPDATE: The two have been identified as Macy Castleman & Jayde Landers

Note: There are two Auburn High Schools that have Trojans as their mascot - Alabama and Illinois. After researching the hoodies worn by the females in the video, we have concluded it is the high school in Illinois. The gray hoodie has the logo of IESA, which is the Illinois Elementary School Association. The logo incorporates the shape of Illinois state. The black hoodie links to Auburn High School.


Two young girls, who appear to be students of Auburn High School (AHS) in Illinois are going to have quite a rude awakening this morning, as a video they made has gone viral.

When the video was made is a big question. Right now it's unknown if it's recently made or from years past. Regardless, from what we've learned of Auburn the town it's a good time to focus some attention on an almost all-white town that rid itself of African Americans years ago. Clearly, the legacy of that town has affected new generations.

In the video the girls are heard rapping, "We hate ni**ers cause they smell. They don't work. So we should bring back slavery to whip them ni**ers."


They appear to be under the influence, but that's not going to be an excuse, as they will now suffer the consequences of their behavior. A Twitter account used by Auburn High School is already being hit with posts by an enraged public.

The black hoodie worn by the girl on the right clearly shows it to be from Auburn High School. However, it's yet to be confirmed that they are students there.

The internet is wide reaching and doesn't forget. They'll quickly be positively identified and their reputations ruined. Their futures of getting into college or landing a job are now quite shaky.

These two racist girls appear to be residents of a historically racist town. The racial disparity in the town where AHS is located is staggering.

Auburn is noted as being part of a system that rid towns of black residents, which explains why they have such a low African American presence.

A story on racism says, "...numerous small Illinois towns with few Black residents – such as Alton, Auburn, Thayer, Girard, Pawnee and Taylorville – as well as Evansville, Indiana, did make major efforts to expel Black residents. These expulsions were often enacted through brutal violence and threats made by white supremacist mobs."

An article that ranks Illinois' most racist cities has Auburn at #17 and alleges that a Ku Klux Klan klavern (chapter) was once in the town.

Auburn is noted as being a sundown town in the book Sundown Towns: A Hidden Dimension of American Racism

Sundown towns, also known as sunset towns or gray towns, were all-white municipalities or neighborhoods in the United States that practiced a form of segregation historically by enforcing restrictions excluding non-whites via some combination of discriminatory local laws intimidation, and violence.

As with all high schools, drugs and alcohol are strictly forbidden. As it's a criminal act, whether an arrest is made or not, the girls could be hit with a school violation, if they were indeed under the influence. The school that appears to be connected to the girls specifies that a conduct violation can occur even if not on school grounds.

Aggressive behavior is defined as: Any behavior that may cause physical or emotional harm to someone else and/or urging other students to engage in such conduct. Prohibited aggressive behavior includes, without limitation, the use of violence, force, noise, coercion, threats, intimidation, fear, bullying, or other comparable conduct.

Grounds for disciplinary action apply whenever the student's prohibited aggressive behavior is reasonably related to school or school activities, including, but not limited to:

1. On school grounds before, during, or after school hours or at any other time when the school is being used by a school group;
2. Off school grounds at a school-sponsored activity or event, or an activity or event which bears a reasonable relationship to school;
3. Traveling to or from school or a school activity, function, or event; or
4. Anywhere, if the aggressive behavior may reasonably be considered to be a threat or an attempted intimidation of a student, a visitor, or staff member or an interference with school purposes or an educational function.

Hate Trackers has reached out to AHS and will have more details as they become available.

Help Hate Trackers continue exposing the alt-right and other serious groups and individuals, by making a donation to our site. We're here to keep you and your family safe and informed. Donate Here
Posted by Hate Trackers at 8:05 AM
Email ThisBlogThis!Share to TwitterShare to FacebookShare to Pinterest
Newer Post Older Post Home