For at least two years, the owner of Lasill Mini Storage Complex and the Ft. Sill Blvd Car Wash, both located at the same complex at 2002 NW Fort Sill Blvd in Lawton, Oklahoma, has allegedly been hurling racist slurs and threatening Indigenous People, who try to use his businesses.

There's even accusations that Powers has stalked people in his black truck. One person claims, he was followed home.

The business owner, who stands accused of racism and potentially violent behavior, is named Sean Powers, age 58. His two sons are employed by the City of Lawton, which may be why he's been getting away with what he's been doing.

However, one son admits to being helpless in doing anything. More on that later.

"Pulled up to wash my car at the same car wash I’ve used since 2006. As I was gathering the trash in my car and grabbing all my quarters this guy pulls up and tells me “You need to leave, get that Indian shit outta here” as he’s pointing at my KIOWA TRIBAL TAG! I’m gonna say he’s probably the owner but had absolutely no REASON to speak to me the way he did & of course he was on his phone in a matter of seconds calling the good ole LPD. Needless to say I WILL NOT EVER GO BACK....& I ENCOURAGE you to not either. I was ALONE & HE GOT OUT OF HIS Truck to approach me! With all the crazy things that are happening today he’s lucky I didn’t have a gun CAUSE HE DID MAKE ME FEAR FOR MY LIFE. Then I soon realized his BARK WAS LOUDER THAN HIS BITE! When I got out of my car he got back in his truck & dialed 911!! I’m the one that got walked up on !!! I’m the one who was in danger!! But DONT WORRY SIR I GOT MY INDIAN SHIT OUT OF YOUR CAR WASH!!" 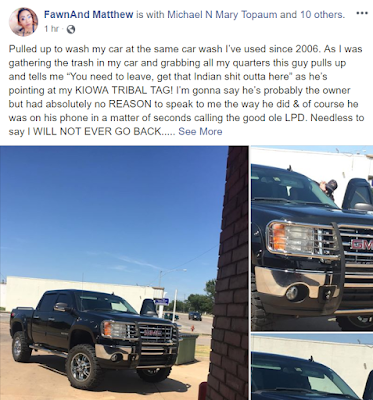 After we were tipped off to that post, Hate Trackers started doing searches and found where other People of Color had had similar experiences with Sean Powers.

Complaints go back as far as October 2017. 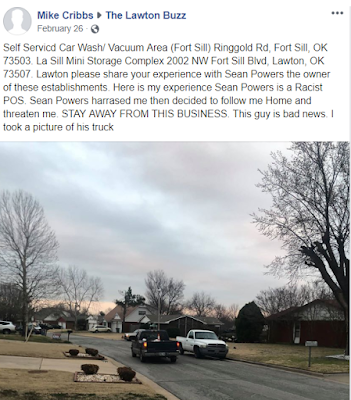 That motivated us to dig deeper into Sean Powers. He doesn't maintain any social media accounts that we found, but we were able to review background reports, obits, and family lines.

Before long, we discovered he had two sons named James and Joshua.

With his sons being employed by the City of Lawton and one an officer with their police department, it may be a possible answer to the question: Why won't the cops do anything?

It's a complicated issue, but at a fundamental level Oklahoma police departments quite clearly have systemic racism issues. Often, racism itself is passed to other generations.

We can't say for sure that is the case here.

In an emails to Hate Trackers, Sgt. Powers says he is estranged from his father. He said, "Please understand I do not talk to my father nor help or support him in any way. He has many issues and refuses to acknowledge them or take responsibility."

In another email, the police officer stated, "The deal with the PD is not that they don’t do anything, he just knows the law well since he has been in business over 30 years and calls the police weekly on people for every stupid thing you can imagine. Sometimes he is wrong and he has even been arrested for obstruction the police when he did t like what they did. I let him sit in jail and never bailed him out so please trust me, I am not a supporter nor want anything to do with him. Unfortunately I didn’t get to pick the person my father turned out to be. It’s really hard on me and my brother but I can assure you, I treat all people equal and have never been accused of such things. I have been a officer for almost 10 years now and truly enjoying helping the community."

The community of Lawton is in Southwestern Oklahoma. It lies in Comanche County and abuts the Fort Sill Army Base, which was established right after the Civil War to fight the Indian Wars and keep relocated Native Americans on the lands assigned to them in Indian Territory, which is now Oklahoma.

Many tribes are in the immediate area, including the Comanche, Ft. Sill Apache, and Kiowa.

The Indigenous in those parts have long suffered extreme racism from the whites that took their land and settled there.

For a time, Ft. Sill was used as a concentration camp to hold Native American, like Geronimo and his band of Apaches. Later, it was used as an interment camp during WWII to imprison Japanese-Americans. It was to open up again to inter Indigenous Children rounded up at the Southern U.S. Border, but that plan was stopped by Indigenous activists, many of which are descendants of the concentration camp's former prisoners.

The northern part of Ft. Sill Boulevard, where Powers' businesses are located, is a former red-light district. It ends where the base has its southern entrance. Prior to it being cleaned up about twenty years ago, that stretch hosted strip clubs, adult video arcades, drug dens, and brothels - all there to serve the needs of the U.S. soldiers coming off base for leave.

Apparently, they failed to clean up the seediest part of Fort Sill Blvd - Sean Powers.

Hate Trackers has reached out to Sean Powers, but he has not returned our phone calls.