This is a follow up story to a broader one dealing with the serious disrespect the St. Louis Jewish Community showed to Native Americans on their day trip to the Fort Sill Army Base in Oklahoma, which was at one time a concentration camp where many Indigenous suffered and died.

Whether it's doing a tomahawk chop, donning a war bonnet for Halloween, going to a New Age sweat lodge, or more, the Indigenous are often subjected to the racist practice of cultural appropriation.

That theft of our ways often greatly disrespects the sacred traditions the first inhabitants of this land have held for thousands of years.

Rabbi Susan Talve - seen in the video above waving around a sage smudge stick during her visit to Oklahoma - has a website where she proclaims:

Rabbi Susan Talve is the founding rabbi of Central Reform Congregation, the only Jewish congregation located within the City limits of St. Louis. When other congregations were leaving the city for the suburbs, Rabbi Talve joined with a small group to keep a vibrant presence in the city to be on the front line of fighting the racism and poverty plaguing the urban center.  Today she performs life cycle events, leads worship services for the seven hundred fifty plus households that comprise the congregation, and is actively involved in the teaching of young and adult members. She also teaches courses on Jewish life and thought and in both the Jewish and non-Jewish communities.

Rabbi Talve has led her congregation in promoting radical inclusivity by developing ongoing relationships with African-American and Muslim congregations, and by fostering civil liberties for the LGBTQ community.  Today CRC serves as a home to generations of LGBTQ families and to many Jews of color of all ages.  She has performed same gender marriages since she arrived in St. Louis in 1981 and was on the first Marriage Equality bus to Iowa where she married her first legal couple and has since had the privilege of marrying more LGB& T couples than she can count! The core value of radical hospitality has made CRC a safe home for many individuals and groups that have been marginalized, including the opportunity to serve as a site for and support the ordination of Roman Catholic Womenpriests in 2007.  As part of a committed pro-choice congregation, Rabbi Talve continues to stand on the front line of abortion and reproductive rights issues.

Her heart seems to be in the right place, but note there is no mention of any work she's done with the Indigenous or an explanation as to why she feels qualified to engage in leading Native American religious practices.

Indian Way is not her way and she has no right to pretend it is.

Cultural appropriation is a method of a dominant group (usually whites) stealing from a minority culture. Those of us living under colonial rule suffered the loss of much of our culture, as tribes were wiped out or Indigenous children had the Indian beat out of them at assimilation school. Even today they still bulldoze our sacred sites and upend the graveyards of our ancestors. What practices we managed to get through to modern times have now been taken and sanitized so that whimsical whites can play cut-out Indian.

Those practices are sacred to us. They're not for entertainment. Believe me, no matter one's motivations, they're not honoring our ways by lessening them or deciding their racial superiority allows them the right to appropriation.

Whites took everything from us. Now, they want to take our prayers.


The burning of a sage smudge stick in and of itself is not Native American. It's a practice for specific tribes. We're many nations. In Oklahoma alone, there are 39 federally-recognized tribal nations, all with their own ways.  Some prohibit the use of sage altogether. Some use cedar. Others the herbs found within the areas they originally populated.

One wonders if the rabbi believes all Indians lived in tipis and hunted buffalo too.

First Nations and the Indigenous have diverse customs according to their own beliefs and traditions. They're as varied as the wide land they reside on. From one end of Europe to the other, cultures are different. So too are they with the Indigenous here. Yet many want to lump them all into being identical. based on something they saw on a television western or came across at a New Age fair.

They live on this land, but can't be bothered to learn about the very people they took it from. Such is their feeling of white supremacy.

What Rabbi Talve did was engage in a racist stereotype. She couldn't be bothered to talk to the Indigenous in the heart of Indian Country about if what she planned to do was correct and allowable. The rabbi committed a serious faux pas. I can't say for certain she has ever been around Indigenous before. She and her group certainly managed to avoid them during their visit to Indian Territory.

Were they sincere about learning Indian Way they were in the right place to do it. The Indigenous concentration around Lawton/Fort Sill is pretty thick.

In fact, a great many religious leaders, including medicine men and women, could've been invited to do the ceremony correctly and in regard to tradition.

Tactless Talve never afforded them that opportunity or respect.

The Comanche Nation headquarters is just a few miles north of Fort Sill. They would've graciously sent someone qualified to do the ritual. The Fort Sill Apache Tribe (who barely survived the concentration camp) was near them too. As were the Kiowa, Wichita, Delaware, Lanape, and Caddo. Further north, they could've called in the strong medicine of the Cheyenne and Arapaho.

It's damn hard to avoid the Indigenous in the area. You pretty much have to go out of your way to do so.

It does appear the rabbi came across a few Indigenous, who should've directed her to respect our ways. Perhaps they weren't around during her sage burning or they could've steered her to the understanding that what she was doing was wrong.

However, that would be unlikely. The way of the Indigenous isn't always to correct the white man. That can be dangerous. Some feel it's better to let slights go. Just as some found it easier to speak English than have one's fingernails pulled out by a nun or priest.

Now, wouldn't it have been beneficial for all had a Jewish rabbi invited the descendants of those who were interred at the fort's concentration camp to come do the sacred ceremony? 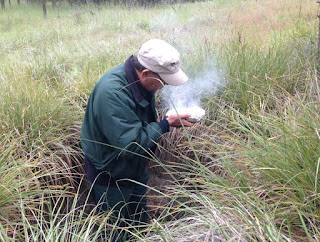 Being a religious leader for a people accustomed to such camps, you'd think she'd have known  better.

While waving the smudge stick around, Talve shouted a false definition of the practice. She maybe got that definition off the package, as it was stunning in its inaccuracy.

The Indigenous, who practice smudging (an Anglo term), do so as a form of prayer and blessing.

It's a purification act for people and places. It can also be used as a form of exorcism to repel bad spirits and influences. Eagle feathers and pipes are purified by the burning smoke.

Buying a spiritual medicine is highly taboo among most the Indigenous. When you buy a commercial smudge stick to mimic an Indigenous religious act, you've committed a horrible offense.

Further, those commercial smudge sticks are never going to measure up to what the Indigenous regard in a ceremonial burning. A lot goes into it. As many of those commercial bundles often include other herbs than sage, it should not be burned for ceremony. The herbs may not be native to this land, it may not be the right sage, it may not have been properly harvested. It may not have been collected by a religious leader entrusted by a tribe to do so.

It certainly can not have been purchased at a New Age shop and waved about haphazardly by someone not considered to hold the appropriate position to practice the ritual. Many tribes restrict the practice to only those who have gone through their own purification process and been deemed fit to carry it out. Among many, the smoke should first purify the one welding the bundle.

Talve did not come anywhere close to properly conducting the sacred act.

She committed blasphemy...or at least the Indigenous form of it.

The racially insensitive Rabbi Talve needs to lose her New Age books and learn some respect for the Indigenous People on whose stolen land she walks.

For a person whose own religion has been oppressed and whose own people have faced genocide like the Indigenous have, you'd think she'd know better.

Talve, go rub your crystals or prepare for Passover. Our ways are not yours, nor are they yours to steal and disrespect. Just don't worry about us Injuns going to Auschwitz and pulling the crap you did here. We're better than that.