31 dead shooting victims were to be grieved, instead low class MAGAs gave Trump an assault rifle and held a rally

From our Have You Lost Your Fucking Mind? department.

Today, August 7th, President Donald J. Trump, who many are blaming for radicalizing the monster who massacred Indigenous People in El Paso, visited both that city and Dayton, Ohio where another mass shooting occurred.

Leave it to the extremely low-class MAGAs to turn a memorial in Dayton for a combined 31 dead victims into a tacky celebration of the egotistical, white nationalist Trump.

Take note that on the side of the first RV is a flag showing Trump, stylized as Rambo, welding an assault rifle. 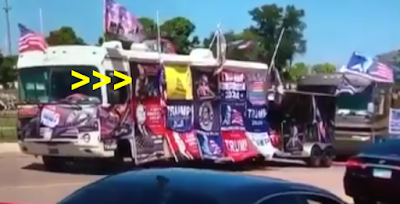 Again, this was for a memorial for shooting victims.

Meanwhile, in El Paso, Thomas Bertram of Sugar Land, TX, showed up armed with a gun and knife, wearing latex gloves, terrorizing people. His truck was covered in Trump fandom, like the flag seen in Dayton. Police let him go, because he hadn't started shooting yet. 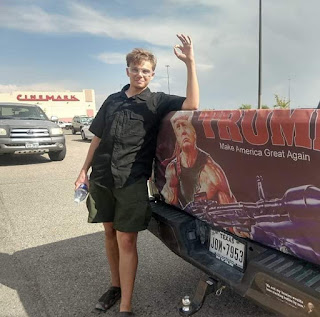 You'll note that he's flashing a white power sign in this photo.

No class.
All trash.

Keep up with all our news reports and more at www.hatetrackers.online
Help Hate Trackers continue exposing the alt-right and other serious groups and individuals, by making a donation to our site. We're here to keep you and your family safe and informed. Donate Here