In an epic act of hypocrisy, hate-group leader James Del Brock is now stalking and shaming homeless panhandlers in Hot Springs, Arkansas, while asking for donations on Facebook to fix his trailer house and to finance his activism. Apparently, the Supplemental Security Income check he is drawing from the federal government for disability isn't quite paying the bills.

This after a year of violence towards vulnerable communities and the conning of a senior citizen.

The Hiwaymen, co-founded by Del Brock and Billy Sessions (real name Billy Helton), first got attention in 2017 at the white supremacist Unite the Right rally in Charlottesville where neo-Nazi James Fields, Jr. drove his car into a crowd of counter-protesters killing Heather Heyer.

They consider themselves a pro-Confederate group, but have expanded into becoming a full-blown hate group after violent attacks on LGBTQ's and harassing mosques.

Mostly, what they're into these days is finding ways to financially support Del Brock and Sessions. 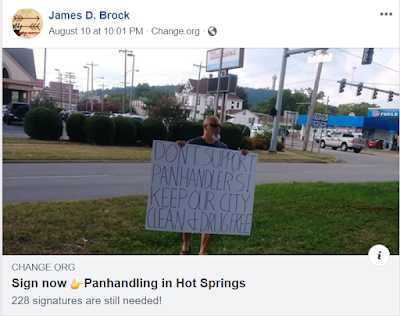 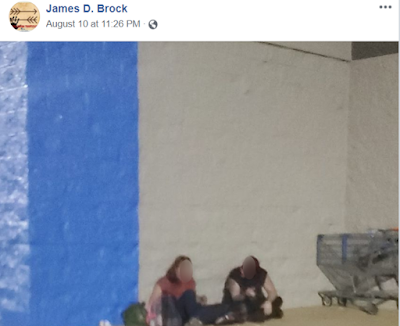 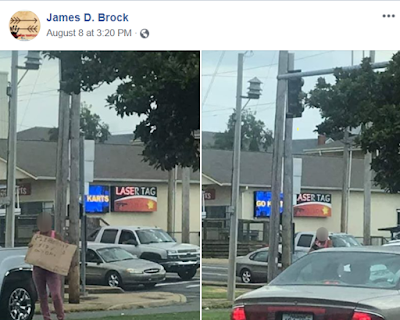 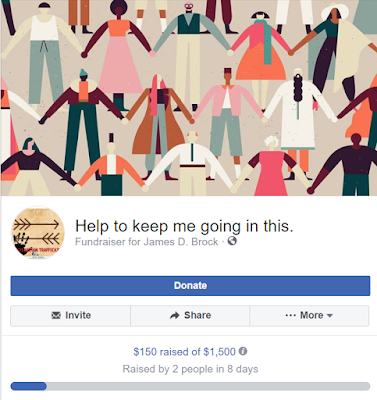 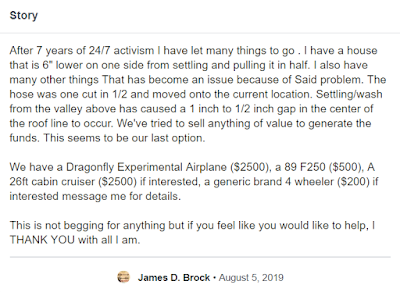 Del Brock belongs to a group on Facebook called 'Keep Hot Springs Free of Panhandlers' that is stalking and shaming the city's homeless population; including children. Although he is not the founder, MAYBE, the Hiwaymen member is helping to distribute the information on multiple Facebook pages.

We're not here to debate how one feels about panhandling. Our focus is on how James Del Brock of the Hiwaymen has found another vulnerable community to bully, while he himself panhandles on social media for his personal benefit.

The Facebook group targeting people says on its about page, "I'm tired of our city being over run by panhandlers it's gone on long enough. They make our city look bad and it's time to take action and run them off. Keep your money and quit giving it to the lazy dope addict."

As seen in recent years, when the homeless are targeted, things can get very nasty; including when incited parties set them on fire.

The page's founder is unknown as they will not disclose that information.

The only video made available by the group is one recorded by James Del Brock Saturday, August 10th. Hate Trackers has decided to show just a portion of the over twenty minute video, so as not to fully identify the victims of Del Brock's stalking.


In that video, Del Brock complains of the littering. That's ironic, as one of the complaints about the Hiwaymen is that they throw down their trash and lit cigarette butts wherever they're protesting. It's a pattern we've seen frequently monitoring their videos.

Regardless of one's personal opinion, panhandling is a Constitutional Right according to the U.S. Supreme Court.

Del Brock calls them criminals for exercising their Constitutional rights, while at the same time he is exercising his right to panhandle on Facebook. He is that dense.

And as for the drug use? Both Del Brock and his one-time associate Kevin Holland have been alleged to be meth dealers in the Hot Springs area. In fact, some of the Hiwaymen have drug convictions.

One such Hiwaymen is Travis Rail, who Del Brock was seen with in Oklahoma City protesting a mosque. 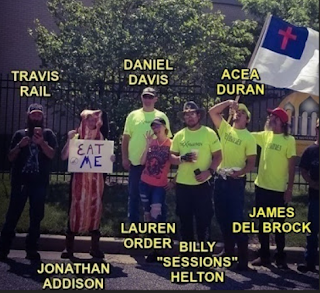 The abusive group is, also, showing the faces of children on their Facebook page. Likely, those children have to go to school in Hot Springs. Having their faces plastered on Facebook will no doubt lead to bullying and shaming.


The causes of homelessness and panhandling are myriad. One can point and claim lazy or drugs, but this doesn't give anyone the right to stalk and bully them and their children.

And that's another curious factor in this.

Master schemer Del Brock began a fishy anti-bullying campaign earlier this year where he and his brother-in-law began showing up across the street from schools trying to lure children over with balloons. This was done under the auspices of bringing attention to bullying in schools...as long as parents and teachers weren't around. 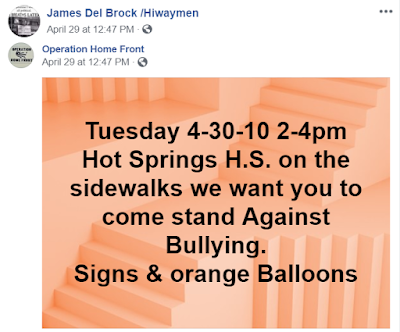 Del Brock has been under the influence of the QAnon conspiracies, which include a lot of ones surrounding pedophilia. The FBI has concerns those conspiracies will fuel extremist violence.

Already, Del Brock has been involved in acts of violence with his hate group.

Ending pedophilia is a lofty goal, but, when it becomes an obsession, there tends to be some deeper meaning to it.

When you start hanging out across the street from schools with balloons, then it becomes alarming.

Del Brock's getting around children, while making sure their parents aren't nearby, has been raising some eyebrows. With his now focusing his camera on vulnerable homeless children, those concerns are even more dire.

It should be noted that in the video above Del Brock says he was just returning from Little Rock. He and the Hiwaymen were on the steps of the Arkansas State Capitol protesting Child Protective Services, who they believe are sex trafficking children. 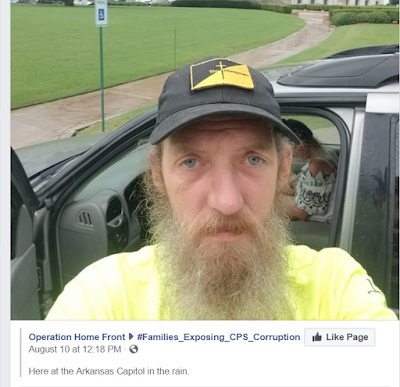 By the way, the shameless Del Brock tried to raise funds for the anti-bullying campaign and the CPS protest too.

An anti-bullying campaign is certainly greatly suspect considering Del Brock and his fellow Hiwaymen are known bullies, who have attacked LGBTQ venues and harassed mosques.

After their attempt on February 25th to enter an LGBTQ Human Rights Campaign meeting in Little Rock was stopped by security, the group seemed to become more focused on anti-gay activities.

Back in May, news blew through the Hiwaymen that Del Brock and Sessions swindled an elderly woman out of her life savings.

They had her believing that in order to continue their mission of saving the Confederacy, they needed $8,000 to purchase a used van. The con men bought a $1,200 clunker to show her that her money had been spent for such, then split the remaining $6,800.

It was during a time, when Sessions was desperate for money to keep Lauren Order's habits satisfied.

As soon as that money was gone, so was Lauren Order.

That resulted in a plunge in donations going to the pair, leading the duo to find new ways to avoid employment and get money. Sessions went on a major tirade during a live stream about how the Hiwaymen's supporters weren't doing enough for them, while Del Brock has pursued one scheme after another.


While Brock likes to scream "Get a job!" at the homeless, he fails to mention he won't work.

He appears capable enough to travel long distances, stand, march, walk, and brawl, so his desire to not work and let the government support him may have to do with mental health issues. Even that, however, seems odd with his being cognizant enough to do activism.

SSI requires recipients to report any additional income they receive, as it is based on all resources one has. Brock's receiving donations under the table would fall under those reporting requirements.

The Hiwaymen have lost a lot of members in recent months over infighting. That internal turmoil now seems to have caused friction between Sessions and Brock. After Sessions live streamed in drag, Brock showed his disfavor. 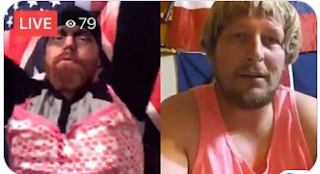 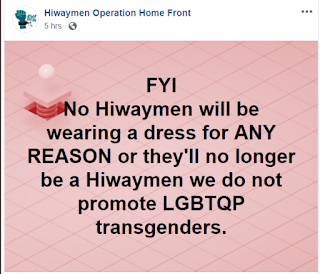 Sessions is quite egotistical. It's almost certain he's not taking the directive from Brock very well.

THE EIGHT BEATITUDES OF JESUS

"Blessed are the poor in spirit,
for theirs is the kingdom of heaven.

Blessed are they who mourn,
for they shall be comforted.

Blessed are the meek,
for they shall inherit the earth.

Blessed are they who hunger and thirst for righteousness,
for they shall be satisfied.

Blessed are the merciful,
for they shall obtain mercy.

Blessed are the pure of heart,
for they shall see God.

Blessed are the peacemakers,
for they shall be called children of God.

Blessed are they who are persecuted for the sake of righteousness,
for theirs is the kingdom of heaven."


Keep up with all our news reports and more at www.hatetrackers.online
Posted by Hate Trackers at 3:20 PM
Email ThisBlogThis!Share to TwitterShare to FacebookShare to Pinterest
Newer Post Older Post Home