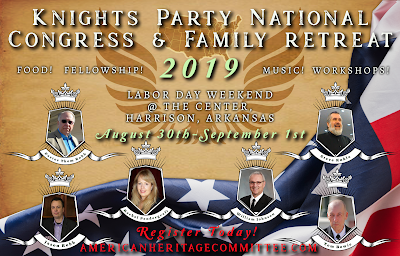 "Come for a wonderful weekend packed with patriotic speeches, music, and workshops! Meals are available at the private conference center and a delicious banquet served Saturday and Sunday evening. Children’s classes will be conducted which will include crafts and heritage lessons and they always enjoy the large playground. Attendees may enjoy a game of volley ball or the bonfire on Saturday night. Spacious and scenic grounds allow for camping.  Enjoy yourself at the nation’s only White Nationalist Family Retreat."

Lambs to the slaughter.


The Knights Party of the Ku Klux Klan will be hosting a gathering of white nationalists from August 30th to September 1st, Labor Day Weekend, at their secluded headquarters in rural northern Arkansas.

In recent decades, a splintered Ku Klux Klan has been struggling to survive, as they find growing competition from other white nationalist groups. In order to maintain a presence, even one with dwindling influence, the KKK tends to pass their teachings down to other generations.

Pastor Thomas Robb, who is hosting the retreat, is well known for doing just that.

Consider him the Pied Piper of Hate.

Founded by David Duke in 1975, the Knights Party of the Ku Klux Klan has been under the helm of Pastor Thomas Robb since the 1980's.

As the group's national director, he holds sway over the Christian Revival Center near Harrison, Arkansas.

That compound houses four generations of the Robb Family and is the Knights Party's national headquarters.

Robb has been involved in white nationalism and Christian Identity, an extremely racist and anti-Semitic religious ideology, for half a century.

The pastor, also, appears to be a bit of a thief.

A Southern Poverty Law Center Report on Robb claims, "Robb took strong control of the Klan’s finances. He was eventually accused of embezzling hotline proceeds and a $20,000 anonymous donation, resulting in a split with several high-ranking members."

That report goes on to describe how Robb's faction eschews the typical Klan robes for a more sanitized look. His people may not be burning crosses on front lawns, but their retreat next weekend will include a traditional cross burning.


In 1993, Robb organized a protest against the Martin Luther King National Holiday in Pulaski, Tennessee, which is the birthplace of the Ku Klux Klan.

The event eventually became known as the White Christian Heritage Festival, held each October in Pulaski.

Robb has direct connections to a great many infamous white supremacist figures and groups ranging back to the Sixties. He maintains some of those associations to the present - at least among the few who have survived to 2019.

The last person on that list of names, Tomislave Sunic, attended the Faith & Freedom Conference Robb hosted at his compound back in April of which Hate Trackers had a series of reports on.

The Yugoslavian-born Sunic is deeply involved in a fascist group called Nouvelle Droite that arose in France during the 1960's. 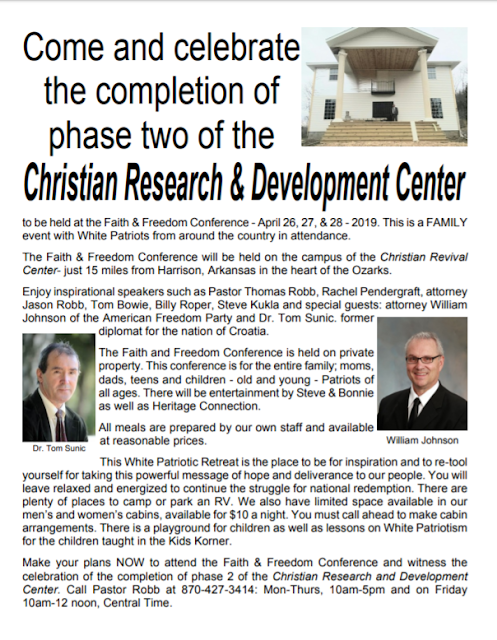 In February 2019, Robb traveled from his Klan compound in Arkansas to visit Edward Reed Fields, a notorious KKK Grand Dragon, in Marietta, Georgia, who had founded the National States' Rights Party (NSRP) in 1958.

The NSRP opposed racial segregation, while promoting white supremacy, and did so violently.

Fields' partner in the terrorist organization was a man named J.B. Stoner, who was involved in the 1958 racially motivated terrorist attack on the Bethel Baptist Church in Birmingham, Alabama. In 1980, he was finally convicted of that event.

Five of Fields' men bombed the Hebrew Benevolent Congregation Temple in Atlanta, Georgia on October 12, 1958. Fortunately, no one was injured.

According to the Southern Poverty Law Center, "For more than a decade, Fields’ NSRP engaged in a racist terror campaign, bombing black churches and assassinating civil rights workers, including Willie Brewster, shot and killed in July 1965. Stoner was eventually convicted for a bombing attempt at a Birmingham, Ala., church. Fields went on to produce pro-segregation, deeply racist and anti-Semitic propaganda for the next fifty years. His crude tabloid, The Thunderbolt, was a Klan favorite. It ceased publication in 2008.

While monitoring the Russian social media platform VK for Klan activity in February, Hate Trackers found the photos and a post made by Jason Robb, the son of Thomas Robb.

In the post he stated, "Pastor Thomas Robb visited Dr. Ed Fields in Georgia about a week ago. Dr. Ed Fields and Pastor Robb have been involved in the white resistance since the 60s. Dr. Fields published the truth at last newspaper for decades and spoke with Pastor Robb at rallies in Montgomery, Alabama and the annual Stone mountain rallies organized by Mr. Venable up to the late 80s. They have remained close friends for decades. I posted this so some who are new to the struggle will know the fight has been going on for a long time and just not a few years ago and what old warriors look like. Of course I can say that since he is my dad." [All errors belong to Jason Robb]


Now, it's out with the old and in with the new.

In seeking to replenish his shrinking numbers, Pastor Robb has reached out to both Klan children and non-Klan children.

While grooming children into white nationalism, the hate-mongering predator warns those with parents not of the hate group "If your parents don’t like the Klan, you need to handle your relationship with them carefully. You must never waver from your convictions and love of our race, faith and homeland."

At 73, Robb is getting a bit too old to keep up with Klan activities, so he's been preparing his son attorney Jason Robb to eventually take over.

Pastor Robb's daughter, Rachel Pendergraft, acts as the Knights Party's national organizer and is considered number two within the organization. However, being female they're not going to allow her to take over for her father. As a preteen being raised in the Klan, she was "knighted" by David Duke and has been spreading the White Christian message for nearly 35 years now.

That video is about six years old. They're now having their four children - Charity is 23 with three children and Shelby is 21 with one child - and are raising a fourth generation of their family into the Ku Klux Klan.

Keep up with all our news reports and more at www.hatetrackers.online
Help Hate Trackers continue exposing the alt-right and other serious groups and individuals, by making a donation to our site. We're here to keep you and your family safe and informed. Donate Here
Posted by Hate Trackers at 5:59 PM
Email ThisBlogThis!Share to TwitterShare to FacebookShare to Pinterest
Newer Post Older Post Home