Earlier this year James Delano Brock Jr. of the Arkansas-based hate group Hiwaymen fell under the thrall of QAnon and began protesting around Little Rock and Hot Springs with a handful of abusive parents, who had lost their children to state custody. Most of those actions occurred outside of state child welfare offices, but were, also, conducted on street corners and at a graduation ceremony.

QAnon is a 4chan offshoot of the widely discredited Pizzagate conspiracy theory that appeared during the 2016 presidential race.

It claimed that the Comet Ping Pong restaurant and pizzeria in Washington, D.C. was one of several sites where Bill and Hillary Clinton along with other ranking members of the Democratic Party were running a child sex ring.


On December 4, 2016, Edgar Maddison Welch from Salisbury, North Carolina, fell for the conspiracy theory, went to the Comet Ping Pong, and fired three shots from an AR-15-style rifle that struck the restaurant's walls, a desk, and a door.

Fortunately, no one died during the rampage. Welch was sentenced to four years behind bars in 2017.

What does QAnon believe?

"Now, Donald Trump in this conspiracy theory knows all about this evil cabal's wrongdoing. But one of the reasons that Donald Trump was elected was to put an end to them, basically. And now we would be ignorant of this behind-the-scenes battle of Donald Trump and the U.S. military — that everyone backs him and the evil cabal — were it not for 'Q.' And what 'Q' is — is basically a poster on 4chan, who later moved to 8chan, who reveals details about this secret behind-the-scenes battle, and also secrets about what the cabal is doing and also the mass sort of upcoming arrest events through these posts."


The driving forces behind James Brock's protests was that Arkansas Child Protective Services had been trafficking children for a sex ring run by Hillary Clinton, à la QAnon. His social media at the time saw Brock spiraling further into the insanity. He found a few parents, who had lost custody of their children for abuse and neglect, to run around with him and claim CPS was not protecting kids, but rounding them up so that they could be sold instead.


Brock plunged even further down the rabbit hole, when a homocide occurred.

After the June 4th murder of former state senator Linda Collins-Smith, Brock went on a paranoid rampage pointing fingers at different people for being behind the death.

The Hiwaymen claimed Collins-Smith was killed due to her investigation into an Arkansas child sex trafficking ring that she claimed was linked to the Clintons.

The local QAnon crowd immediately began a campaign claiming Hillary Clinton had Collins-Smith murdered, as the former state senator was preparing to testify against her before a grand jury. That claim, of course, was absurd. Yet Brock and QAnon couldn't let their defective belief go.

The conspiracy theory was quickly disproved, as 48-year-old Rebecca Lynn O’Donnell, a friend of Collins-Smith, was arrested for the crime and is now awaiting trial. Prosecutors are seeking the death penalty.

Even before Collins-Smith murder, Brock and the Hiwaymen had shown up to a graduation ceremony at the Arkansas School for Mathematics, Sciences and the Arts Class of 2019 at the Hot Springs Convention Center on May 25th.

Hillary Clinton was the commencement speaker.

The United States Secret Service made sure that he and the Hiwaymen never got anywhere near the former presidential candidate.

Brock's drug-addled behavior has now led to a civil lawsuit against him. One that he cannot afford.

That page remains live as Brock refuses to shut it down. He ignored a cease and desist letter sent by the plaintiff's attorney, so they filed the federal trademark infringement lawsuit against him.

The veteran's charity claim people are mistaking the groups for each other and it's resulting in losses of contributions to the legitimate organization. In the lawsuit they've specifically addressed Brock's going after CPS and Clinton and such actions have caused the charity to suffer economic damages over it. 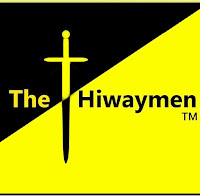 In response to the lawsuit, the Hiwaymen have responded by committing a federal crime, as they're now falsely claiming they own a trademark and have added TM to their logo. That is a violation of the Trademark Counterfeiting Act of 1984.

The punishment for breaking the act is up to five years in a federal penitentiary and a $250,000 fine.

The hate group sells t-shirts, flags, and such bearing their logo. Now claiming a trademark that doesn't exist makes each of the products illegal.

Billy Sessions has been screaming on Facebook Live Stream that he has studied law and is a legal expert. So far, he's gotten both civil and criminal law incorrect.

The Hiwaymen can count on two things: Rose Hill being made aware that Billy Sessions, real name Billy Helton, is a co-founder, who should be added to the lawsuit, and that they're now using a counterfeit trademark.


Rose Hill isn't saying, but they're very likely overjoyed at taking on the Hiwaymen, due to the unrelenting defamation of Clinton.

Brock has about three weeks to find his own attorney and respond to the legal action lodged against him.

The civil action has the Hiwaymen doing their usual song-and-dance show for financial assistance.

As is Brock's nature, he's now dropping hints that he'll be needing rescuing from the latest mess he's gotten himself into. Throughout this year instead of getting a job the Hiwaymen has made pleas to: fix his car, fix his trailer house, and to cover his expenses as he travels the country smoking dope and bullying LGBTQs and Muslims. The year prior saw him begging for money to help him with legal fees after he was arrested in Louisiana for possession of cannabis.

The Hiwaymen were in the state to stand for a Confederate monument. Brock was there to stagger around until the police pulled him aside.

Incapable of acting responsibly and accepting that he has erred, Brock is going the route that someone else is to blame for what he did, so please send him money. 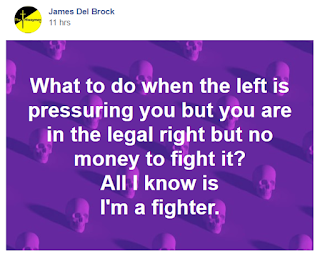 Within hours of that post landing early this morning, Billy Sessions was already live streaming for money. That Hiwaymen, while living in his father's trailer house, always has his hand out.


Both Sessions and Brock are frequently unemployed and survive on the largess of government benefits and donations they seek via their Hiwaymen actions. That, however, has crashed, as even other pro-Confederate groups are coming out accusing the pair of substance abuse problems and frauds.

Help Hate Trackers continue exposing the alt-right and other serious groups and individuals, by making a donation to our site. We're here to keep you and your family safe and informed. Donate Here
Posted by The Warriors at 2:50 PM
Email ThisBlogThis!Share to TwitterShare to FacebookShare to Pinterest
Newer Post Older Post Home