Typically, the KKK's modus operandi is to sneak around in the middle of the night and drop flyers on driveways and in mail boxes, as being seen associating with an organization that's murdered over 5,000 U.S. citizens is an embarrassment to most people.

Not so with one particular Klan syndicate and their business partner.

The Harrison Daily Times, an Arkansas-based newspaper, is unethically providing newspaper ad space to a well-known hate group called the Knights Party of the Ku Klux Klan. At least twice this year the publication has allowed the group to purchase ads in order to attack local LGBTQs and to promote their Klan headquarters.

In monitoring Ku Klux Klan activities on the Russian social media site VK.COM where hate and terror groups interact, Hate Trackers uncovered statements made by Pastor Thomas Robb, national director of the Knights Party of the Ku Klux Klan, boasting about the newspaper providing prime space for their most recent ad published in September 2019. We then obtained copies of those ads. 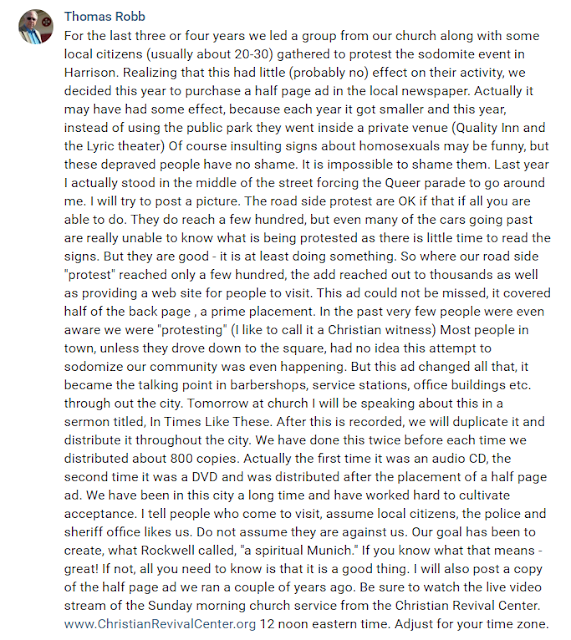 Robb and the Klan run a compound near Harrison they call the Christian Revival Center, which is who purchased the Harrison Daily Times ads.

The most recent ad appeared on the back page where it took up half the page below the fold. 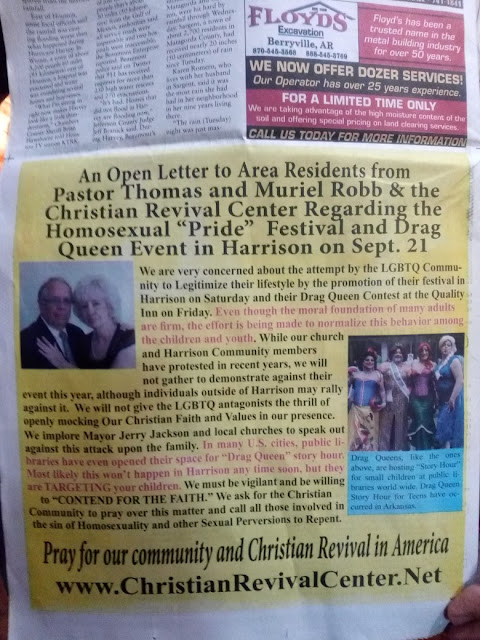 In his VK post, the pastor brags about the reach he obtained saying "This ad could not be missed, it covered half of the back page , a prime placement. In the past very few people were even aware we were "protesting" (I like to call it a Christian witness) Most people in town, unless they drove down to the square, had no idea this attempt to sodomize our community was even happening. But this ad changed all that, it became the talking point in barbershops, service stations, office buildings etc. through out the city."

The Harrison Daily Times helped spread the white supremacist message far and wide, while throwing its LGBTQ readers underneath the bus.

It should be noted that Robb and the Christian Revival Center being the Ku Klux Klan is not a secret. The newspaper would certainly know who they're dealing with and where the money for the ads was coming from.

Hate Trackers reached out to that newspaper on their Facebook, Twitter, and via email for a response, but publisher Jim Perry, editors Lynn Blevins and James L. White, and advertising manager Todd Edwards were too chickenshit to respond.


The City of Harrison - where Robb felt comfortable enough building a KKK compound nearby - has a long, sordid history, when it comes to race relations. 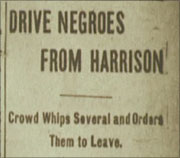 "According to historian James Loewen in his book Sundown Towns (New Press, 2005), “In late September of 1905, a white mob stormed the jail, carried several black prisoners outside the town, whipped them and ordered them to leave. The rioters then swept through Harrison’s black neighborhood, tying men to trees and whipping them, burning several homes and warning all African Americans to leave that night. Most fled without any belongings. Three or four wealthy white families sheltered servants who stayed on, but in 1909, another mob tried to lynch a black prisoner. Fearing for their lives, most remaining African Americans left. Harrison remained a ‘sundown town,’ [i.e., a place that threatened, ‘N*****, don’t let the sun go down on you here’] until at least 2002.”

"The violence in Harrison caused black residents in neighboring communities to flee the area as well. In the 1900 Census, the black community in Harrison numbered 115 people in a town of 1,500. Less than ten years later, that community was gone. Today, Harrison is home to just over 12,000 residents, more than 97 percent of them white. Fewer than 40 African Americans live in Boone County, of which Harrison is the county seat, out of a total population of 34,000."

The Harrison Daily Times was established in 1876, so would've been in the thick of that hate event.


The Knights Party of the Ku Klux Klan was founded in 1975 by David Duke, an American white supremacist and white nationalist politician, convicted felon, and former Grand Wizard of the Ku Klux Klan. Duke is a Holocaust denier, and espouses white separatism and antisemitic conspiracy theories. (See Wiki entry)

It's been under the helm of Pastor Thomas Robb since the 1980's.

As the group's national director, he holds sway over the Christian Revival Center near Harrison, Arkansas.

That compound houses four generations of the Robb Family and is the Knights Party's national headquarters.

Robb has been involved in white nationalism and Christian Identity, an extremely racist and anti-Semitic religious ideology, for half a century.

The pastor, also, appears to be a bit of a thief.

A Southern Poverty Law Center Report on Robb claims, "Robb took strong control of the Klan’s finances. He was eventually accused of embezzling hotline proceeds and a $20,000 anonymous donation, resulting in a split with several high-ranking members."

In 1993, Robb organized a protest against the Martin Luther King National Holiday in Pulaski, Tennessee, which is the birthplace of the Ku Klux Klan.

The event eventually became known as the White Christian Heritage Festival, held each October in Pulaski.

Robb has direct connections to a great many infamous white supremacist figures and groups ranging back to the Sixties. He maintains some of those associations to the present - at least among the few who have survived to 2019.


In February 2019, Robb traveled from his Klan compound in Arkansas to visit Edward Reed Fields, a notorious KKK Grand Dragon, in Marietta, Georgia, who had founded the National States' Rights Party (NSRP) in 1958.

The NSRP opposed racial segregation, while promoting white supremacy, and did so violently.

Fields' partner in the terrorist organization was a man named J.B. Stoner, who was involved in the 1958 racially motivated terrorist attack on the Bethel Baptist Church in Birmingham, Alabama. In 1980, he was finally convicted of that event.

Five of Fields' men bombed the Hebrew Benevolent Congregation Temple in Atlanta, Georgia on October 12, 1958. Fortunately, no one was injured.

In late September, Pastor Thomas Robb preached a sermon at the Ku Klux Klan headquarters to further assail LGBTQs. In a video posted on YouTube, Robb tells his fellow Klan members the names those who allowed the LGBTQs to use the Lyric Theater for some of their pride activities.

Historically, a KKK leader will name the group's perceived enemies in hopes that the foot soldiers will go out and terrorize and lynch those parties.

In the video, Robb continues boasting about the newspaper ad.

It's not the first time this year that the Harrison Daily Times has had a business relationship with the terrorists at the Ku Klux Klan either.

Although we're unsure of the date, the ad below deals with the construction of a new building on the KKK compound property. That building was only completed this past summer. 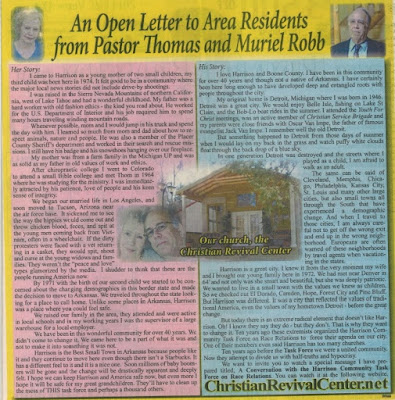 Jim Perry is the publisher for the Harrison Daily Times, but is employed by a Missouri-based media company. Ultimately, he is responsible for the newspaper's content. He appears to be helming the Harrison paper from his office in Missouri.

The Harrison Daily Times is owned by the Phillips Media Group (PMG), who owns nine newspapers in the region. Having the same owner, it's possible they're Klan-friendly as well.

Perry, a Texas native, also previously worked with PMG as publisher for papers in Eureka Springs and Berryville, Ark. He was publisher of the Hope Star daily in Hope, Ark., as well as a mid-sized daily in Leesburg, Fla.

They, also, own the Nowata Printing Company, which has two locations.


For those interested in contacting the Harrison Daily News about their cozy and profitable relationship with the Ku Klux Klan, here are their numbers: 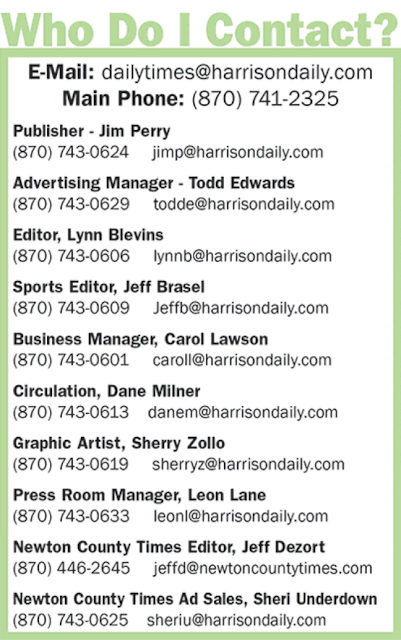