In an October 3rd live stream on Facebook and YouTube, hate group leader Billy Sessions (his real name is Billy Helton) of the Hiwaymen revealed he was paid a visit by the Federal Bureau of Investigation over his statements calling for a new American Civil War.


The Hiwaymen, co-founded by James Del Brock and Billy Sessions (real name Billy Helton), first got attention in 2017 at the white supremacist Unite the Right rally in Charlottesville where neo-Nazi James Fields, Jr. drove his car into a crowd of counter-protesters killing Heather Heyer. 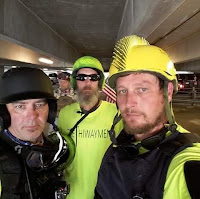 In the photo to the left, Sessions on right, Brock in center, are seen in Charlottesville with an unnamed member of the white nationalist League of the South, an incredibly racist and violent group.

They attempted to get in with larger white nationalist and patriot groups, but beyond a few minor Confederate groups and Patriot Prayer, no one wanted to deal with the Hiwaymen.

Sessions is considered a pariah inside the Patriot Movement. Most other groups think of him as a silly clown, who only embarrasses their causes and is more concerned about getting publicity for himself than anything.

In turn, Sessions frequently attacks groups like the Oath Keepers and III Percenters, who have cold shouldered him.

Help Hate Trackers continue exposing the alt-right and other serious groups and individuals, by making a donation to our site. We're here to keep you and your family safe and informed. Donate Here
Posted by Hate Trackers at 12:12 PM
Email ThisBlogThis!Share to TwitterShare to FacebookShare to Pinterest
Newer Post Older Post Home