After a decade of hate, white nationalist trades hate for hope and burns racist gear 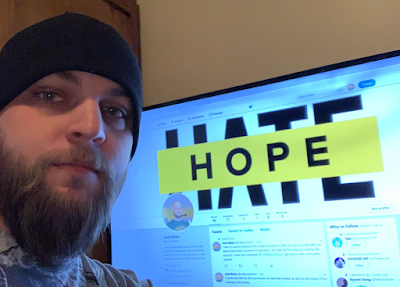 After a decade engaging in many forms of white nationalism, including the Klan and the Nazi Movement, Bates - a former Marine - is now apologizing for his years creating racial division.

This weekend Bates came out as a non-hater.

For the past ten years I was a racist, homophobic, transphobic, anti-Semitic extremist on the far-right. My journey through the White Nationalist scene saw me joining and associating with may different far-right organizations and wearing just as many uniforms, outfits, and collecting related clothing or paraphernalia.

In my continuing effort to disentangle myself from the White Nationalist movement, I decided to burn those things that I have acquired over the years.

In the video below you will see a KKK robe already laid out over the pit, the infamous black National Socialist uniform, an Alt-Right and Nazi flag, as well as other things I wanted out of my home and my life forever.

If you are on the right and are thinking about joining one of these, or similarly styled groups or organizations, I beg of you…don’t. You will lose your humanity, your dignity, your compassion, empathy, and soul in the process, and that’s just the beginning. Take some time for self-reflection and think about what you’re going to be risking should you take the plunge into the sordid world of White Nationalism.To all those people and communities that I harmed with my words and actions over the last decade, know that I deeply and humbly apologize and that I will be working for the rest of my life to make amends and hopefully to help keep others from taking the same path I did.