Let's get started with Commander Jeff Schoep's reaction to his officer squealing to the public about internal affairs.


Public Statement in regards to former NSM Director of Community Outreach Matthew Heimbach
It was the hope of the NSM to do this quietly and more discretely. However, a public post was made on social media regarding the expulsion of Matthew Heimbach calling him a traitor. I never approved or endorsed labeling our former Director of Community Outreach as a traitor. Matthew Heimbach has been a friend and comrade of mine for many years, however, his political ideology does not coincide with the views of the NSM. Matthew is a strong believer in Strasserism. Strasserism is an obscure faction that exists to the left of National Socialism but slightly to the right of Communism. The Strasser brothers opposed Hitler’s anti-Semitism and were considered traitors. Gregor Strasser was executed on the Night of the Long Knives for his left-wing views and direct opposition to Hitler. Otto Strasser tried to split the national socialist party and was exiled. The political ideology of Strasserism is not directly compatible with true national socialism or the NSM. Matthew repeatedly made social media posts commemorating leftist Fidel Castro, Kim Il Sung and Gregor Strasser. The National Socialist Movement has spent too many years fighting the far left in the streets to get into bickering matches over social media. Ultimately it was decided by all parties that Matthew was not a correct fit for the NSM, and that we would all go our separate ways. There is no hard feelings, and no dirt for the press to throw at us, or at Matthew regarding this matter. The National Socialist Movement wishes Matthew the best in his future endeavors. He is a bright, intelligent, well spoken young man who still has a lot to learn. It is the hope of the NSM that Matthew will shrug off the leftist yoke of Strasserism and find his way back to true National Socialism. Respectfully, Commander Jeff Schoep National Socialist Movement

Although his name is not mentioned the person who leaked the dismissal of Matthew Heimbach was Kynan Dutton. Hate Trackers saw that VK social media post and immediately reported on it making the internal NSM drama even more public. 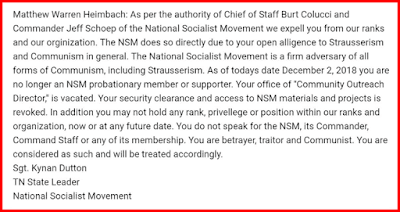 
Dutton has since removed the post, but we'd already revealed what it said.

Between one Nazi's dismissal, one Nazi running to tattle (that's you Kynan!, and one Nazi being pissed off that the other Nazi tattled on his better friend than Kynan Nazi

During the middle of all this drama, Matthew Heimbach set the Nazi world on fire with a scathing rebuke of the NSM.

Below is Heimbach's full and unedited letter.

I am resigning my position within the National Socialist Movement as of today. I cannot continue to be a member of an organization that claims to be National Socialist and spits upon the ideology by perverting it with reactionary, capitalist, imperialist, and supremacist rhetoric and actions.

This is not a question of optics or other petty debates, this is about the very definition of what National Socialism is. Being opposed to White supremacy, racial hatred, imperialism, and capitalism aren't just talking points for the media, it's what I actually believe.

Savitri Devi said "I'm for a multi-racial world in which each race keeps to itself, in harmony with the other races. Like in a garden, you have flowerbeds of roses and flowerbeds of carnations and irises and different other flowers.

They don't intermarry. They stay separate, and each one has its beauty."

National Socialism is not:

I have found all of these things within the ranks of the National Socialist Movement to the point I cannot call it a cancer within the organization, but nearly the entire organization.

Many of the members of the NSM in their public posts, official organizational media, and in private, are not National Socialists in any meaningful way.

This is a problem throughout the post-Rockwell movement, but the problem has grown to the point that any ideological connection with the NSDAP or National Socialist philosophers or sister movements and the NSM is truly non-existent.

To the NSM, wearing a swastika or giving a salute is giving a middle finger to POC or Jews, not sacred symbols of the Aryan people that deserve respect.

To the NSM, politics is holding two rallies a year and going home, instead of working to organize communities and give voice to the voiceless.

To the NSM, the NSDAP is what they see on the History Channel between episodes of Pawn Stars, Ancient Aliens, and Swamp People, a stylized and commercialized farce of enemy propaganda which is the absolute opposition of the truth.

The education level on the ideology is miniscule, with few every reading essential texts and the organization providing no instruction for members on these topics. This allows previously held notions of conservatism and reactionary race hatred to continue into the organization.

Many of the members view themselves as a crew or a gang, and have no desire to be a politically effective organization, certainly not a revolutionary National Socialist vanguard that is needed.

Terms like "probate", "fresh cut", "patched" are used often, not denoting how effective someone is in an organization, but a more crew environment vs anything political.

Jeff Schoep is a good man, surrounded for decades by retards and misfits of the 1.0 movement. Jeff could have gotten a lot farther if he had a better team around him. In this case, myself and several former TWP comrades tried to help, but the membership of the NSM didn't want to evolve, change, and truly become National Socialists, they wanted to stay a stagnant and dying hate group, and that's on them.

I'm not going to clap along to more neo-imperialist drivel, praise of capitalism or the Masonic founders, or recycled loser points from a movement that has had only decades of failure to show for its work.

I'd rather be correct than have a group, my kids future depends on me working towards a better world, not compromising.

I have nothing but respect for Commander Jeff Schoep, his sacrifices, and his leadership contribution to this movement. Harry Hughes is also a man of the highest character who I truly respect, same goes for Brandon Lashbrook and several others who are beacons of light in an otherwise dark place.
The NSM is dying, and has been dying for a long time.

Attendance at rallies has been on a steady decline for half a decade now, with basically every other nationalist group able to out organize them and turn out more people, without a thirty year head start.

None of the regional organizers have a desire or ability seemingly to actually *do anything*, like hold a basic meeting once a month. My local group of NS families have more frequent, and more well attended, meetings than any NSM region throughout the year.

Everything is atrophying and dying, and the organization won't make it much longer. I thought I could make a difference, take my experience to give a helping hand to the NSM to get them on the right track towards leaving the White Supremacist scene, and become political advocates for our people.

The truth is however, you can't teach an old dog new tricks, and you can't turn a bunch of Hollywood Nazis into National Socialists.


Help Hate Trackers continue exposing the alt-right and other serious groups and individuals, by making a donation to our site. We're here to keep you and your family safe and informed. Donate Here
Posted by Hate Trackers at 10:15 PM
Email ThisBlogThis!Share to TwitterShare to FacebookShare to Pinterest
Newer Post Older Post Home