"Corrective Rape Will Save Us" - Octavio Rivera of The Daily Stormer 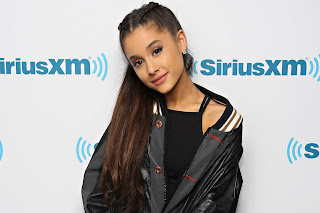 The Daily Stormer is headed toward the male supremacist dark side of the pro-rape lobby, as one of their top bloggers has now begun organizing a "corrective rape" movement.

Octavio Rivera appears to be not only asking his readers to flood the internet with corrective rape memes, but is also promoting the idea that the government should sanction public rapes - most notably the rape of 25-year-old singer Ariana Grande. 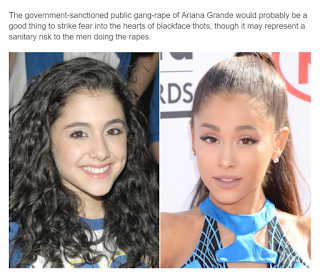 In a blog Rivera published on Monday, he suggests, "The government-sanctioned public gang-rape of Ariana Grande would probably be a good thing to strike fear into the hearts of blackface thots, though it may represent a sanitary risk to the men doing the rapes."

His motivation is because he resents women for being too picky.

"Women think they’re some kind of royalty nowadays. Treating them as such doesn’t help. You have to bring them back to earth," Rivera blogged.

He goes on to say, "Once the government has been purged of Jews, we will have to debate the merits of rape punishment administered by the public, or whether we should have professional rapists, or even rape-machines in order to remove the human element from the corrective rape."

The Daily Stormer comes and goes on the internet as it tends to get shut down a lot due to its content. Its current webhost is Eranet International Limited, which is based in Hong Kong. 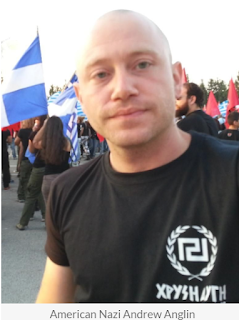 Octavio Rivera is a fake name used by the blogger. It could be someone else or it could be another persona of founder Andrew Anglin, age 34, trying to put his more extreme views onto an alias.

Anglin - known as the alt-right’s most vicious troll and propagandist - founded The Daily Stormer on July 4, 2013. It's become known for its white supremacy and anti-Semitic commentary.

The Columbus, Ohio native claims he's living in Lagos, Nigeria, but the reality is his current location is unknown. Some say he is in Russia, while others say he's hiding out in Germany.

The actions of his troll army in stalking the subjects Anglin has chosen has resulted in one highly publicized lawsuit.

As Anglin and The Daily Stormer's main function are to set loose an alt-right troll army across the internet fixated on their most recent infatuation, it's likely a series of memes on Grande as well as on the corrective rape movement will soon hit the web.

The Daily Stormer helped organize the Unite the Right rally in Charlottesville, which led to the death of activist Heather Heyer by a self-avowed Nazi named James Alex Fields Jr.