Big oops! Top NSM Nazi doesn't care as much about James Fields as he's been pretending 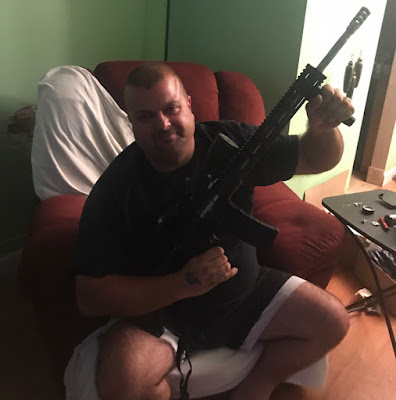 NSM Lt. Burt Colucci, 42, of the Lakeland and Kissimmee, Florida areas is the chief of staff for the neo-Nazi group known as the National Socialist Movement.

He's also been a major supporter of James Fields Jr., who was convicted of first degree murder today in the death of Heather Heyer during the 'Unite the Right' rally in Charlottesville last year.

He's spent over a year chest thumping and talking about how Fields is innocent and trying to convince others that he is the expert in this case.

As it turns out, tonight he made one little slip up that shows Burt Colucci knows nothing about Fields' legal case.

Fields was found guilty of all ten charges in Virginia today after jurors deliberated for seven hours.
The 30 hate crimes Colucci mentions are from a totally separate federal case that's been brought by the United States District Court. That case hasn't even gone to trial yet - though a hearing is scheduled for Monday.

In federal court Fields faces a total of 30 charges: one count of a hate crime act resulting in the death of 32-year-old Heather Heyer, one count of racially motivated violent interference with a federally protected activity, and 28 counts of hate crime acts causing bodily injury and involving an attempt to kill.

Despite being a self-professed expert on Fields and a sympathetic supporter, Colucci turned out to not know enough about the case to even get a fundamental fact across about it.

The Nazi clearly hasn't followed the case, nor truly cares about his fellow Nazi enough to get the basics correct.

Now he wants to talk about the case on BlogTalkRadio.

Colucci was once a Ku Klux Klan grand dragon in Florida before trading in his robe for knickers and becoming a full-blown Hollywood Nazi where he plays second fiddle to the theatrical Commander Jeff Schoep.