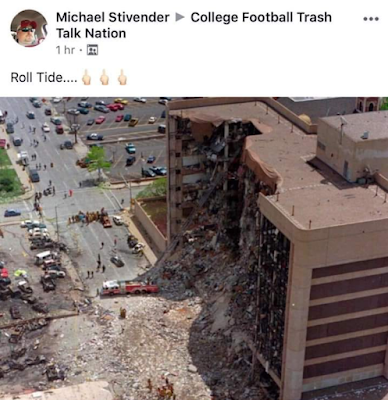 Football comes with a lot of trash talking. It's a given fans are going to talk smack to each other, especially in the run up towards a National Championship.

However, one fan of the Alabama Crimson Tide named Michael Stivender  crossed a line that deserves a serious reckoning after he posted a photo of Oklahoma City's darkest hour - April 19, 1995.

Along with the photo of the exploded building Stivender used the rallying cry "Roll Tide" to imply the college football program in Alabama should roll over Oklahoma like a terrorist did. 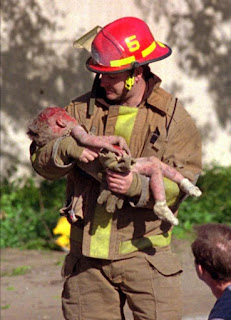 So does whoever is running a Facebook page called College Football Trash Talk Nation, who believes this is acceptable. 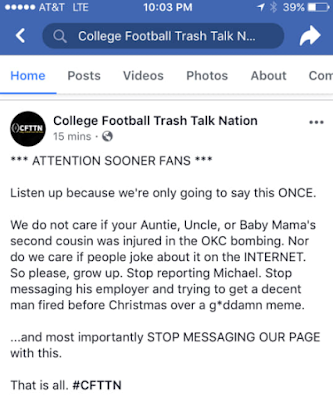 They've now closed their group and it appears more than Stivender was sharing the offensive meme. That's their group page though. Their Facebook business page is public HERE.

College Football Trash Talk Nation also had this to say to Oklahomans: 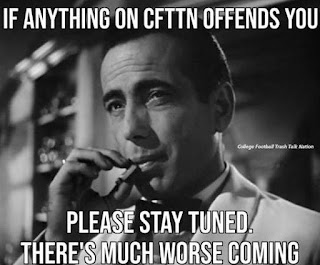 That Facebook page doesn't want Sooners - or anyone with an ounce of decency for that matter - trying to get the Stivender creep fired, so here's their info.

Administering the page and protecting Stivender are:

Then there's one guy named Imamoe Lester, who probably is, so doesn't want to use his real name.

Moderating the page are (If also an admin or using multiple ID's, they're not listed twice.):

There is talking smack and being smacked for talking, which is a just punishment for this cretin Michael Stivender and his supporters.

Alabama is set to play Oklahoma on Dec. 29th. Hopefully, by then Stivender will have been fully censured by his family, friends, and fellow Alabamans - so should those running defense for the creep.

Oklahoma is as proud of its college football traditions, as Alabama is. But this is taking being a fan to a whole lower level - a level which most football fans are not going to tolerate. Even Texas will ride with the Sooners on this one.

Even Bama fans are upset at this.

Donald Key said, "I saw that post from an OU friend of mine and it made me mad. Some people have no class at all. I love Bama, but this display of stupidity makes me feel ashamed and for what it is worth on behalf of the sane Bama nation I apologize."


Help Hate Trackers continue exposing the alt-right and other serious groups and individuals, by making a donation to our site. We're here to keep you and your family safe and informed. Donate Here