Notorious sociopath Lispy Jim Stachwiak, aka Johnny Infidel, appears to have crossed protected speech is is making actual threats to shoot and torch members of Antifa and several of the enemies he's made within the Militia and Patriot Movements.

In this video Hate Trackers recorded off of one of Stachowiak's Facebook pages, he makes some pretty serious threats.


Stachowiak's threats have been numerous over the years and include his calling  for the death of black women and children, as well as his former associates.

Although in the threatening video he talks badly about convicted child rapist Charles Dyer, aka the July4Patriot, and the late J.T. Ready - a neo-Nazi and border militia leader, who murdered his family before killing himself - Stachowiak was close friends to both before ultimately turning on them. It's his pattern.

After Dyer's initial arrest for federal weapons charges involving a grenade launcher stolen from the military and a Oklahoma charge for child rape, Stachowiak remained friends with the suspect and began raising funds to help Dyer with legal expenses.

However, after he was caught embezzling those funds, Stachowiak started attacking Dyer and stopped promoting him as the first prisoner of war in the Second American Revolution.

He befriends someone in white nationalism or patriot groups, soaks them for money, milks them for information, and then, he will denounce them, as well as turn snitch against them.

That's left Stachowiak with a lot more enemies than friends.

Just last week we reported another incident of his calling patriots to go lone wolf on members of Antifa.


The term lone wolf as related to terrorism means, "A lone actor, lone-actor terrorist, or lone wolf, is someone who prepares and commits violent acts alone, outside of any command structure and without material assistance from any group. He or she may be influenced or motivated by the ideology and beliefs of an external group and may act in support of such a group."

For a thorough background we've done of Stachowiak over the last nine years, you can read our intel report here.


Lispy Jim is constantly being banned from Facebook, YouTube, and Twitter. He's afraid to use the white nationalist sites like Gab and VK, as he's made a lot of enemies over the years and they bully him on those platforms.

He's is currently using two accounts on Facebook that we've found. One under the name James Stachowiak with the address of  facebook.com/james.keay.39 is up, but he got a 30 day timeout in Facebook jail so can't post on it right now. Thus, he switched to a back up account using the name James Joesph Stachowiak, which has a address of  facebook.com/james.stachowiak.100

In recent years Stachowiak has operated from www.freedomfighterradio.com - a domain his mother purchased. However, there's no associated website any longer. The domain now redirects back to facebook.com/james.keay.39

It's there where we recorded the posted video.

Stachowiak is fond of setting things on fire, especially flags. That you can see in the video. However, things don't always go as planned for the tragic clown of the alt-right. Once while monitoring him in 2017, we witnessed him set fire to a Democratic flag. The fire got out of hand and spread to his mother's house where he was living. We managed to do screen shots in between our laughter. 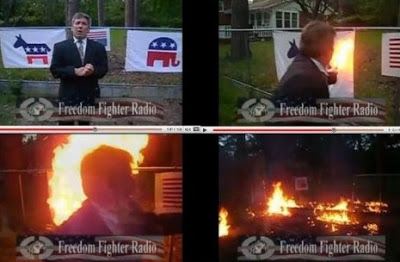 Help Hate Trackers continue exposing the alt-right and other serious groups and individuals, by making a donation to our site. We're here to keep you and your family safe and informed. Donate Here
Posted by The Warriors at 9:20 PM
Email ThisBlogThis!Share to TwitterShare to FacebookShare to Pinterest
Newer Post Older Post Home