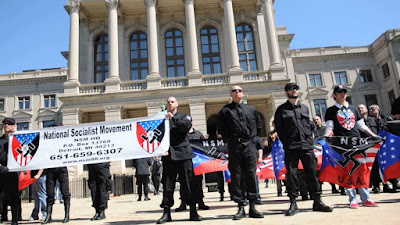 National Socialist Movement Commander Jeff Schoep of Detroit, Michigan and Chief of Staff Burt Colucci of Kissimmee, Florida appear to be conducting a Christmas purge of their aide-de-camps.

This purge is a bit more targeted at higher ups in the NSM than your rank and file stormtrooper.

On the heels of the costume Nazis dumping Matthew Heimbach on December 2nd they have as of today parted ways as with three other prominent members: Kevin James aka KJ aka Shawn Hughes, (real name Scott Hume), Sabrina Burnside, and Daniel Burnside.

Community Outreach Director  Matthew Warren Heimbach, 28, had been removed from their Nazi organization due to "open alligence [sic] to Strausserism and Communism". 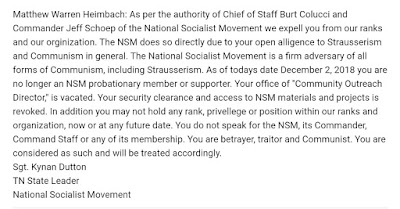 Until today, one of the NSM's most notorious propagandists has been Kevin James/Scott Hume. He runs a YouTube channel and Twitter account via user name Hummerer4632.

Hume and all of his personas has been with the NSM for over a decade and his roles have included acting unit leader of NSM-Phoenix and a propagandist.


He's most recently been serving as the NSM's media director.

Daniel and Sabrina Burnside listed run a controversial Nazi compound in Ulysses, Pennsylvania. The couple are breeding like crazy having seven children under the age of ten and one on the way.

He'd been pretty high up on the NSM ladder having been a director and public face for them for many years.

Daniel Burnside had until today been a corporal with the NSM and their Region 2 director.

You can read more about Burnside at 'What do you do when your neighbor is a Neo-Nazi?'

The current purge looks to have involved Hume and Burnside's involvement in rightwingmedia.net a website operated by Hume under his Kevin James ID.

Inside sources are saying Burt Colucci went on a rampage, because he thought Hume and Burnside were more ego driven than Nazi ideologists.

Right Wing Media (RWM) had been put in charge of revamping the NSM88 website and remastering over eight weeks of internet Nazi radio, including shows run by Colucci and Dutton.

It's not known why they were given the job in the first place, as their own website is a lesson in how not to design one. It looks like someone is stuck on a 15-year-old Geocities platform.

Burnside is set to debut a radio show called 'The Norse Crew' on RWM beginning in January.

Although Colucci is blaming RWM, some within the NSM are saying Colucci has been running around like a honey badger with hemorrhoids in recent weeks acting like a man-baby.

While Colucci and his little buddy Dutton, have been running around unsupervised and purging other leaders, Cmdr. Jeff Schoep has remained mostly silent as he focuses on children. 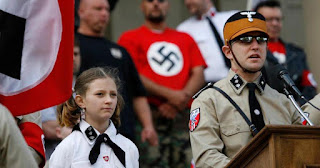 The 48-year-old Schoep, a convicted burglar who claims to have become a Nazi at the age of 10, is looking to further the NSM's outreach to children. He plans to target 14- to 17-year-olds to indoctrinate them and train them in military skills for his Viking Youth Corps.
The requirements to get into the Viking Youth Corps are:

If approved for membership the Nazi youth will be instructed in: